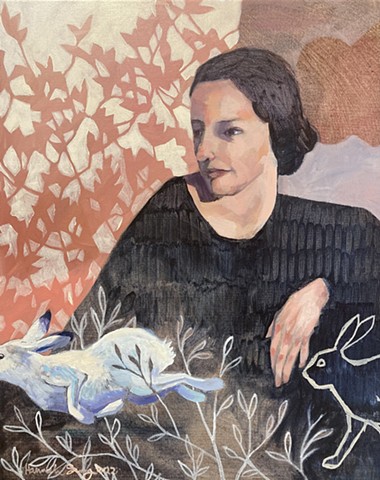 Please contact me with the title of or link to this piece if you are interested in commissioning something similar to it.

This painting was part of an online exhibit at Lark & Key Gallery called Lyrical. It is inspired by the traditional Irish folk song "Creggan White Hare," and it is also a nod to "White Rabbit" by Jefferson Airplane.

In the lowlands of Creggan there lives a white hare As swift as the swallow that flies through the air. You may tramp the world over but none to compare To the pride of ol' Creggan, that bonnie white hare.

One clear autumn morning, as you will suppose Oh, the red golden sun o’er the green mountain rose Barney Conway came down and he did declare "This day I’ll put an end to the bonnie white hare!"

So he searched through thе lowlands and down through the glens All among the wild ditchеs where the white hare had ends Till at last coming down o’er the heather so fair From behind the wild thistle out jumps the white hare.

“Bang! Bang!” went his guns and his dogs he slipped too As swift as the wind o'er the green mountain flew, But his dogs soon came back and this made Barney sigh For he knew that the white hare had bid him goodbye.

And we’re some jolly sportsmen down here from Pomeroy, From Cookstown, Dungannon, and likewise the Moy. "With our pedigree greyhounds we’ve travelled from far And we’ve come down to Creggan in our fine motor car!"

Well into the lowlands these huntsmen did go In search of the white hare they'd look high and low, Till at last Barney Conway from a turf bank so rare Shouted out to the huntsmen: “There lies the white hare!”

So they called up their greyhounds from off the green lea And Barney and the huntsmen all jumped high with glee. It was there on that turf bank all gathered around, Seven dogs and nine men did that poor hare surround.

Well that chase it went on, it was a beautiful view As swift as the wind o’er the green mountain flew, But those pedigree greyhounds they didn’t run too far. They came back and went home in their fine motor car.

Then there came another man and you all know him well His name was Mick Kelly with Bonnie Black Bell. "Oh in search of the white hare today I’ll have fun I'll bet fifty to one my Black Bell of her turn"

Five turns the hare got then from Bonnie Black Bell And the sixth one was given around John Haughey’s well. It was there we lost sight of the hare and the dog And then ten minutes late they rode o’er the black bog.

Well that chase it went on it was great for to see, The white hare and the black dog both roam light and free Till she travelled to Esker where she knew the lands well And to bonnie Black Bella there soon bid farewell.

And now to conclude and to finish this rhyme, I hope you’ll forgive me for singing all this while. If there’s any amongst you up in Carrick more fair Please drink up a health to that bonnie white hare!